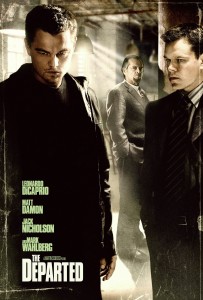 Synopsis: An undercover cop and a mole in the police attempt to identify each other while infiltrating an Irish gang in South Boston.

Did You Know? This is the only remake of a foreign film to win the Oscar for Best Picture.

Quotables: COSTELLO: One of us had to die. With me, it tends to be the other guy.

And now a Word from the Guise:
One of these days I’m going to have the watch the original Mou gaan dou. I’ve seen many reviews that say it’s much better than this one, and I love The Departed. It’s my favourite Scorsese film. However, I do like it a little less than I did when I initially saw it. The only prominent character is a throwaway romantic interest; she has no impact on the story. There would be no difference if she wasn’t in it. I’m glad that she is in it; it brings a nice break in the dick-measuring contest that literally every male character is competing in. But I wish that she had more significance than being arm candy for both DiCaprio and Damon’s characters. She’s only one of three women who have a speaking role in the film, and not one of them ever engages with each other.