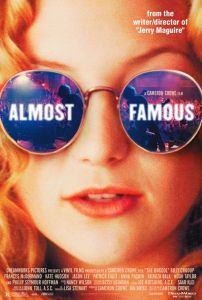 Synopsis: A high-school boy is given the chance to write a story for Rolling Stone Magazine about an up-and-coming rock band as he accompanies it on their concert tour.

Did You Know? Cameron Crowe tried to call the picture Untitled, but Dreamworks wouldn’t allow it.

Quotables: RUSSELL: And you can tell Rolling Stone that my last words were…. “I’m on drugs!”

And now a Word from the Guise:
I’m indifferent to this movie. I didn’t dislike it, but I didn’t love it either. Rock music is something that doesn’t interest me at all, so I don’t care for sex, drugs, and rock-and-roll stories. There were a few scenes here-and-there that resonated with me though.

The performances were all really great though, particularly Fairuza Balk, who unfortunately only had a small role in the film, and whom I believe to be an incredibly underrated actress. My favourite part of this movie was when she’s running alongside the bus, trying to tell William (Patrick Fugit) that his mother called, and she runs headlong into a wall.