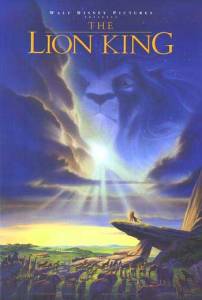 Synopsis: Lion cub and future king Simba searches for his identity. His eagerness to please others and penchant for testing his boundaries sometimes gets him into trouble.

Did You Know? Sir Elton John was given a special screening a few weeks prior to the films release. After noticing that the film’s love song – “Can You Feel the Love Tonight” – had not been included in the final cut, he successfully lobbied to have it put back in. Later, of course, it earned him an Oscar for Best Original Song.

Quotables: SCAR: Now look, Zazu. You made me lose my lunch.
ZAZU: You’ll lose more than that when the king gets through with you; he’s mad as a hippo with hernia.

And now a Word from the Guise:
Like most 5-year-olds have obsessions with animated films, this was one of the ones that I was most obsessed with. Not only did I make up stories with my Lion King toys, play The Lion King video game for SEGA Genesis, dry myself off with my Simba towel, sleep in my Lion King sheets, drink from my Ed mug, and spam the Rafiki button on The Lion King See ‘n Say book to make him say “ass” repeatedly, but I would also beg my dad to take me to this really cool restaurant at the Boise Towne Square Mall – I believe it was called Jungle Jack’s. I wanted to go there all the time, because it had a really awesome jungle rainforest theme, and every single time we would go they would be playing The Lion King. I was really sad one summer when I came up to visit my dad, only to discover that the restaurant had been closed down, and replaced with some kind of pub that I couldn’t go in. But I digress, to this day The Lion King is one of my absolute favourites, and I can still recite the whole thing by heart.