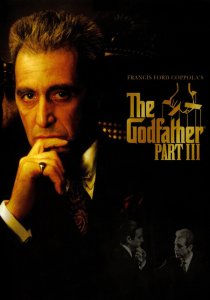 Synopsis: In the midst of trying to legitimize his business dealings in New York and Italy in 1979, aging Mafia don Michael Corleone seeks to avow for his sins while taking a young protégé under his wing.

Did You Know? Sofia Coppola plays Michael Corleone’s adult daughter in this film, but she played his infant niece in The Godfather. Winona Ryder was initially slated to play his daughter but she withdrew so that she could act in Edward Scissorhands.

Quotables: MICHAEL CORLEONE: Just when I thought I was out… they pull me back in.

And now a Word from the Guise:
Sofia Coppola gives a deplorably vapid performance; all of her lines are said as though she’s reading her lines out loud for the first time. She should stick to writing and directing. Though, I don’t think she should shoulder all of the blame. Francis Ford Coppola should have quit while he was ahead. The Godfather: Part III is the bastard son of The Godfather story. It’s tedious and nothing new; the film climaxes in the deaths of several people in various gruesome ways. The only part of this film that I liked was the opera sequence at the end.