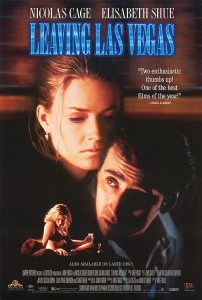 Synopsis: Ben Sanderson, an alcoholic Hollywood screenwriter who lost everything because of his drinking, arrives in Las Vegas to drink himself to death. There, he meets and forms an uneasy friendship and non-interference pact with prostitute Sera.

Quotables: SERA: So, Ben with an “N”… what brings you to Las Vegas? Business convention?
BEN: I came here to drink myself to death.

And now a Word from the Guise:
I’ve never been a fan of Nicolas Cage, but I decided to include this film in my catalog of Oscar winners so that I could see just what it was about his performance that the Academy deemed worthy of Best Actor (especially over the likes of Richard Dreyfuss and Anthony Hopkins). To be quite frank, his performance in this film is trite and over-exaggerated at best and abysmal at worst. The abhorrent juxtaposition of his lunatic mannerisms and soporific delivery are a prime example of his deplorable acting ability. Indeed, it’s rather like watching a 12-year-old stumble his way through Hamlet’s soliloquy. “Seraaaaaa… I’m no-gun-go see-doctor.” Seriously, chewing on broken glass would have been less painful than watching Nicolas Cage chew the scenery.