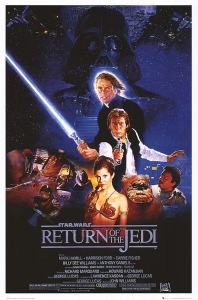 Synopsis: The chronicle of three heroes who aid the Rebel Alliance as they combat the evil Galactic Empire.

And now a Word from the Guise:
I was about 5 the very first time I ever watched the Star Wars trilogy. This was eleven years following the release of Return of the Jedi. I’ve watched these movies countless times, but I had never had the chance to see the original trilogy on the big screen until today. It was such a surreal and amazing experience. It would have been better had the theatre showed the original theatrical versions of the film instead of the pointlessly remastered ones. Nevertheless, it was still a once-in-a-lifetime experience to marathon all seven episodes. Out of the original trilogy, Return of the Jedi is my favourite, mostly because of the Emperor in all of his evil glory.