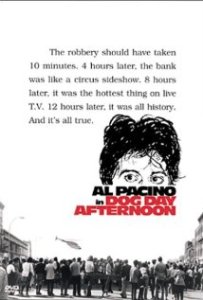 Synopsis: A man robs a bank to pay for his lover’s sex change operation; it turns into a hostage situation and a media circus.

Did You Know? The real life incident that this film is based became a part of police training on how to deal with hostage situations and crowds that were out of control.

And now a Word from the Guise:
There were entirely too many “showdowns” in front of the bank. It seemed like every two minutes Sonny (Al Pacino) was going outside to chat with the police chief, make some ridiculous demand, scream obsenities and threaten the hostages when he didn’t get what he wanted, and then went back inside. Sidney Lumet reportedly didn’t view any of the actual footage, because he didn’t want to make the film as “over-the-top” as the actual event was. But if the actual event was more over-the-top than this… I can’t even imagine.

This movie was made far earlier than it should have been. The events took place in 1971, and the film was only released 4 years later. It seems the filmmakers attempted to shed light on the cruelty and hatred that was aimed at gay, bisexual, and transgender people in the 1970’s, but since it was made during the same decade, all it did was further condemn them: it paraded the community like either narcissistic psychopaths or emasculated weaklings who can’t cope with any amount of emotional stress.

I felt contempt and disgust during the scene where Sonny’s lover, Leon (Chris Sarandon), is explaining to the police that he was told by a psychiatrist that he was “a woman trapped in a man’s body”. One, because of the officer in the background who was smirking and actually burst out laughing when he revealed the psychiatrist’s “diagnosis”. Two, and this is the main one, because I don’t believe that Leon was in fact transgender. Now, perhaps she was (I say she, because Leon did eventually have the transoperation), but I am disinclined to believe so, because the way the line was delivered made it seem like Leon never felt like she was “a woman trapped in a man’s body” until the psychiatrist told her; it seemed more likely that the psychiatrist was trying to give an answer to his homosexuality.

This is just one of many examples in this film that sparked my ire at the media perception of the LGBTQAI community, and I think this film could have been so much greater had it been made decades later, because it would have focused more on the actual mishandling of the media and less on making it a giant freak show.