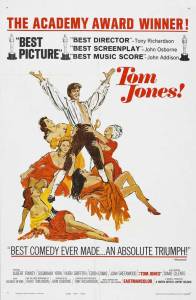 Synopsis: A base-born womanizer falls for a noble girl, while trying to the truth about the nature of his birth.

Did You Know? Hugh Griffith was reportedly drunk throughout much of the production; the scene in which his horse falls on him was not planned, and many believed that he was only saved by virtue of his inebriated condition. The film incorporated every frame of footage before rescuers entered the frame to save him.

And now a Word from the Guise:
Wow. I was not prepared for all terrible this movie is. It’s just really, really not good. I couldn’t keep track of the story because it wasn’t remotely engaging. It was unfocused and all over the place. Plus, there was the fact that young Albert Finney looks terribly similar to Donald Trump, who is easily the most awful human in the country. But that’s neither here nor there. The only thing I liked about this movie was the opening scene, because it was done quite hilariously as a parody of silent films.