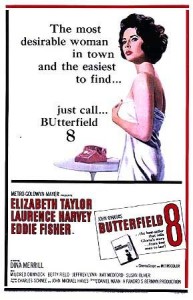 Did You Know? Elizabeth Taylor and her husband, Michael Todd, both intended for Cat on a Hot Tin Roof to be her final film, as she planned to retire from the screen. In fact, Todd had made a verbal agreement with MGM. After his death, however, the studio forced Taylor to make this film to fulfill the terms of her contract with them. Because of this, Elizabeth Taylor refused to speak to the director for the entire production and absolutely hated the film. Over the subsequent years, she repeatedly attributed her Oscar win to an illness she had suffered from rather than her performance.

And now a Word from the Guise:
This film is infuriating. Essentially, the moral of the story is that a woman’s life can only be fulfilled with a man in it, and that it’s in her best interest to never reject a man or defy his authority. After meeting an abusive, priggish male suitor, Gloria falls wildly in love with him, because he’s a smooth-talking sleazeball, and decides to turn over a new leaf. But then everything takes a predictable turn for the worse when Liggett accosts her in public and threatens to kill her.

Gloria decides that she needs to completely start over, so she moves to another city. And Liggett decides that he needs to follow her. She rejects him again and flees, and he literally chases her to her death. You’d think that the film would end with Liggett understanding that no means NO and that a woman is not property. Instead, the film ends with him going on a quest to heal his wounded pride.