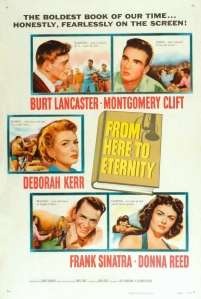 Synopsis: In 1941 Hawaii, a private is cruelly punished for not boxing on his unit’s team, while his captain’s wife and second in command are falling in love.

Did You Know? James Jones, who wrote the novel on which the film is based, considered the adaptation to be “too sanitized” and was dissatisfied with it.

Quotables: PREWITT: A man should be what he can do.

And now a Word from the Guise:
With barely any war, this is a stirring war drama that leads up to the Japanese attack on Pearl Harbor. All of the performances are incredible, especially Frank Sinatra and Donna Reed. They most definitely deserved the Oscars they won.