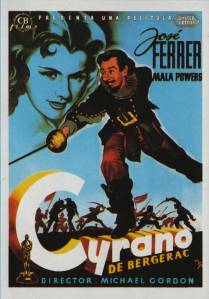 Synopsis: The charismatic swordsman-poet helps another woo the woman he loves.

Did You Know? The failure of the original copyright holder to renew the film’s copyright resulted in it falling into public domain, meaning that virtually anyone could duplicate and sell a VHS/DVD copy of the film. Therefore, many of the versions of this film available on the market are either severely (and usually badly) edited and/or of extremely poor quality, having been duped from second- or third-generation (or more) copies of the film.

Quotables: CYRANO DE BERGERAC: Oh, no, young sir. You are too simple. Why, you might have said a great many things. Why waste your opportunity? For example, thus: AGGRESSIVE: I, sir, if that nose were mine, I’d have it amputated on the spot. PRACTICAL: How do you drink with such a nose? You must have had a cup made especially. DESCRIPTIVE: ‘Tis a rock, a crag, a cape! A cape? Say rather, a peninsula! INQUISITIVE: What is that receptacle? A razor case or a portfolio? KINDLY: Ah, do you love the little birds so much that when they come to see you, you give them this to perch on. CAUTIOUS: Take care! A weight like that might make you top-heavy. ELOQUENT: When it blows, the typhoon howls, and the clouds darken! DRAMATIC: When it bleeds, the Red Sea. SIMPLE: When do they unveil the monument? MILITARY: Beware, a secret weapon. ENTERPRISING: What a sign for some perfumer! RESPECTFUL: Sir, I recognize in you a man of parts. A man of… prominence! Or, LITERARY: Was this the nose that launched a thousand ships? These, my dear sir, are things you might have said, had you some tinge of letters or of wit to color your discourse. But wit? Not so, you never had an atom. And of letters, you need but three to write you down: A, S, S. Ass!

And now a Word from the Guise:
This film is pure excellence, lending most of its brilliance to the charisma and wit of the incomparable José Ferrer. While he easily deserved the Oscar for Best Actor in a Leading Role, I am flabbergasted that that was the only Oscar the film was nominated for. I’d say it’s easily one of the best films ever made, and it should have also received nominations for Best Picture, Best Supporting Actor for William Prince, Best Supporting Actress for Mala Powers, Best Director, Best Adapted Screenplay, and Best Costume Design. This is certainly a triumph of cinema and a comedy of errors on the part of the Academy.