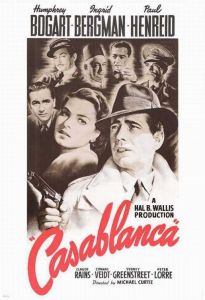 Synopsis: In Casablanca, Morocco during the early days of World War II an American expatriate meets a former lover, with unforeseen complications.

Did You Know? The film’s song “As Time Goes By” had been written years before the film was made, so the Academy declared it ineligible for nomination for Best Song of the Year.

Quotables: CAPTAIN RENAULT: Under the circumstances, I will sit down.

And now a Word from the Guise:
I think this is the most quoted film in history. I didn’t realise just how many oft-quoted lines came from Casablanca.  And it’s quite plain why it’s so often quoted, the dialogue is superb. And it’s so wonderfully acted. But then, with the likes of Humphrey Bogart and Ingrid Bergman, how could it not be.