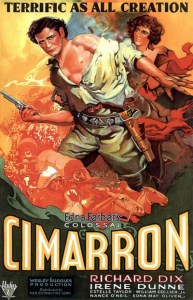 Synopsis: A newspaper editor settles in an Oklahoma boom town with his reluctant wife at the end of the nineteenth century.

Did You Know? This is arguably the only winner of the Best Picture Oscar to lose money during its initial release. The film received excellent critical reviews, but its initial financial failure was blamed on its being released during one of the darkest periods of the Great Depression.

Quotables: SABRA CRAVAT: Do you feel nervous about your sermon, dear?
YANCEY CRAVAT: I’d rather plead to a Texas jury than preach to this gang.

And now a Word from the Guise:
I was really liking this movie, up until the point when the two white leads don’t want to risk their lives to save their children during the shootout. So instead, they send their black, child servant. What’s worse is he gets shot during the shootout, and nobody bothers to see if he was okay, which he would have been had somebody gone to his aid. Instead the gunfight ends, and they literally forget about him, leaving him to die alone. Someone brings his body into the house, and Sabra Cravat gasps as though she forgot that he had just gone to save her child a few minutes prior. Nobody mourns him, nobody gives a damn and it’s because he’s black. He’s “property”. You can say it’s just a movie, but movies are often reflections of real life. You can say it was a “different time”, but time should never be used as a justification of racism and a flagrant disregard for human life.