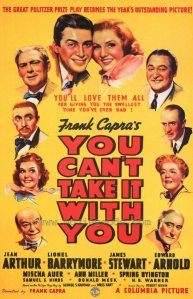 Synopsis: A man from a family of rich snobs becomes engaged to a woman from a good-natured but decidedly eccentric family.

Did You Know? Shortly after filming began, Lionel Barrymore lost the use of his legs due to arthritis and a hip injury. To accommodate him, the script was altered so that his character had sprained his ankle, and he did the film on crutches.

Quotables: VANDERHOF: When things go bad nowadays, you go out and get yourself an “ism”.

And now a Word from the Guise:
This is one of the sweetest and charming farces ever, and it is one of my favourites. I know I’ve said that a lot during my Oscar Movie Marathon, but there are a vast number of films that I absolutely love, and this is definitely one of them. Lionel Barrymore reminds me of my Grandpa Joe, who was always a jovial man who remembered all of his grandchildren’s birthdays. He was such a loving and spirited man, and I miss him tremendously.