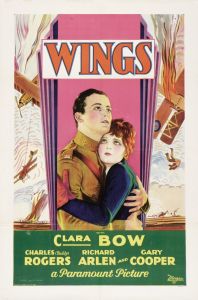 Synopsis: Two young men, one rich, one middle class, who are in love with the same woman, become fighter pilots in World War I.

Did You Know? The film was thought to be lost until, after several years, a nitrate film copy was found at the Cinémathèque Française film archive in Paris.

And now a Word from the Guise:
There is something to be said for the early days of cinema. This was still a new process, with filmmakers developing completely brand new ideas and techniques. Wings is an excellent example of how visual effects can be much more stunning when they are practical rather than when they are CGI. Obviously, CGI was several decades away from being developed, so they had to be practical. Nevertheless, the effect is breathtaking still after 89 years. It’s no wonder that this film won both the Engineering Effects and the Best Picture Oscars.