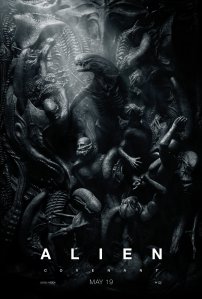 I’ve been a huge fan of the Alien Anthology for a long time. Yes, even the much-maligned (now non-canonical) installments  Alien3 and Alien: Resurrection. So, naturally, I was very excited about Alien: Covenant. I loved Prometheus (sometimes I feel like I’m the only one who does), and Covenant was an excellent follow-up to the 2012 origin story. It answered many of the questions that Prometheus set up, albeit in a vague, not-really-an-answer way.

Many people didn’t like Prometheus, because the motivation for each character, particularly sexy android David, was unclear. On a whim, it would seem, David decides to give some of the organic black goo to an unsuspecting sexy archaeologist, Dr. Charlie Holloway. As we all know, Dr. Holloway subsequently impregnates Dr. Elizabeth Shaw with a Trilobite, and a while later becomes violently ill, and then eventually burnt alive by Meredith Vickers. But what would have happened to Dr. Holloway had he not been killed? Well, it seems that Alien: Covenant has the answer to both this and the motivation behind David’s action.

The main events of Covenant opens 10 years after the events of Prometheus, aboard a colony ship. The crew is transporting 2,000 embryonic colonists to a new planet, but seven years from their destination, their ship is damaged by a massive space shock-wave (a spock-wave, if you will). The emergency protocol is in place, and the crew are awoken from their hypersleep, but not before Captain James Franco is burnt to a crisp and funeral-ejected into space (I wonder how much they had to pay him for 10 seconds of screen time?).

The crew repair the damages to the ship, and receive an odd holographic transmission. Tennessee, the cowboy hat-wearing pilot, realises the message is someone singing “Take Me Home, Country Roads” by John Denver. But how the hell did a human transmission make this far out into space? When you bet your ass our colonists are going to find out.

They locate the source of the transmission to a nearby planet that is soon-discovered to be a better colonization spot that the one they were travelling to. Some of the crew head to the surface of the planet to investigate. There, they discover human vegetation, but also no sign of indigenous fauna. In typical horror movie fashion, the team splits up, with two remaining behind to take geological samples and the rest moving on to the source of the transmission.

The two who remain behind are Carmen Ejogo’s Karine and Benjamin Rigby’s Ledward. Karine is the one taking the sample, while Ledward is her security detail. Ledward goes off to “have a piss”, and he accidentally disturbs some egg sack pods that eject microscopic spores that group together and enter his ear canal. The second team find a crashed Engineer Juggernaut, which we soon discover to be the Engineer Juggernaut that Dr. Shaw and David escaped from LV-223 in at the end of Prometheus. Inside the ship, another crew member, Hallett, disturbs some more pods, accidentally inhaling the spores. Soon, both Ledward and Hallett become violently ill, both birthing a Neomorph Bloodburster in two of the bloodiest scenes in franchise history. Ledward from his back, Hallett from his mouth.

This is what I expect would have happened to Dr. Holloway had he not been incinerate by Charlize Theron. Most likely, it wouldn’t have been a Neomorph Bloodburster, as we know it to be in Alien: Covenant, but perhaps something more similar to the Hammerpede in Prometheus. The Hammerpede, if you recall, was the cobra-like worm-thing that came out of the primordial ooze and attacked Millburn and Fifield. Had Dr. Holloway survived to full gestation of whatever was inside of him, I believe it would have had some resemblance to something in between the Hammerpede and Bloodburster.

The Neomorphs, if you can believe it, appear to be far more aggressive and even faster and more agile than the Xenomorphs. Their skin is translucent and their mouths are similar to that of the Deacon, which bursts from the Engineers chest at the end of Prometheus.

Another crew member, Faris, accidentally blows up their dropship in an attempt to kill one of the Neomorphs. The remaining crew, now stranded on the planet, have to fend off the two Neomorphs. They manage to kill one of the adolescent aliens, while losing another one of their own. A hooded stranger appears, scares off the other Neomorph, and takes the survivors back to some weird lair, which is riddled with the charred remains of some humanoid creatures.

David tells the crew that on their flight from LV-223, the weaponised virus aboard the Juggernaut was accidentally released, killing Dr. Shaw. It is later revealed, through a flashback sequence, that this planet they’re on is the Engineer planet and that David released the virus upon all of the Engineers in the city, killing all of them instantly.

Meanwhile, the remaining Neomorph infiltrates the city and decapitates Rosenthal. David finds the creature feeding on her body and communicates with it. But the first officer-now Captain Oram discovers them and kills the Neomorph. He threatens David as well, demanding to know what’s happening. David reveals that he has been engineering these creatures, trying to create the perfect specimens. He tells Oram that he thinks he has it, and leads him down to the nest of eggs that we’re all too familiar with. Oram is impregnated by the Facehugger, and the Xenomorph is born at last.

Walter, the newer, better model of David, stumbles on the body of Dr. Shaw, preserved and eviscerated. He realises that David killed her as part of his experiment, and confronts him. David kisses him, and then kills him.

Lope is facehugged, but is rescued by another throw-away character, but at the expense of having half his face melted off by the alien’s acid blood.  The throw-away character is immediately killed by the Xenomorph. Daniels, Katherine Waterston’s version of Lieutenant Ripley, finds some scrolls presumably drawn by David that depict the creation of the Xenomorph. David finds her and throws her around the room, but he’s quickly stopped by………WALTER!!!! That’s right, Walter’s had some modifications built into him, so he’s not so easily killed! Walter and David battle it out as the remaining survivors (Daniels and Lope) run toward the dropship captained and crewed by Tennessee.

At the last minute, Walter joins them and so does the Xenomorph! Daniels battles it out with the Xenomorph on the hull of the ship. She kills it, and they all return to the Covenant. Lope is taken to the med-bay where his melted face is treated. All seems well, and it feels really anti-climactic-because-the-Xenomorph-really-didn’t-do-anything-so-how-this-an-Alien-movie, until BAM! “Mother” alerts now-Captain Daniels that there is an unidentified lifeform in the med-bay. It turns out that Lope wasn’t saved from the facehugger, as it managed to impregnate him before being cut off him by that one throw-away character.

Daniels and Tennessee track down the Xenomorph in the showers, where it ravages Upworth (Callie Hernandez) and Ricks (Jussie Smollett – RIP, Jamal Lyon). Walter watches from the monitors, assisting them in closing the alien off into the airlock. And then, in true franchise fashion, they blast the beast out into space.

All seems well again, as Tennessee and Daniels go off into hypersleep once more. But before Daniels goes, she asks Walter if he will help her build her log cabin on the lake, like she and James Franco always planned. Walter seems confused by this, and in a painfully-obvious-from-the-get-go twist Daniels realises much too late that it’s not Walter, but his much-more-evil, equally-sexy predecessor David.

With Daniels and Tennessee off to beddy-bye, David goes into the hypersleep bay full of embryonic colonists, where he regurgitates two Facehugger embryos and places them in the storage unit containing the human embryos.

I appreciate the film as a follow-up to Prometheus. It answered the questions I had, while giving me more questions that will hopefully be answered in subsequent sequels, and introducing new facets to the Xenomorph family. However, apart from Walter and David, I found all of the characters to be bland. It wasn’t even that they were typical horror archetypes, that I can deal with.

No, all of these characters were bland; they had no driving force. With Prometheus, we didn’t know what the characters’ motivations were, with Alien: Covenant the characters lacked motivation altogether. They just existed. The only characters I cared about at all were David and Walter, and maybe that’s because they were both played by my husband, Michael Fassbender, but I even felt something for the non-Fassbender characters in X-Men: Apocalypse, and that’s saying something. The visual effects and cinematography were absolutely beautiful though. I also felt that there was a lot of unnecessary exposition, particularly for characters that hold no influence over the rest of the franchise, and not nearly enough of the Xenomorphs.

All-in-all, I really liked the film, but I didn’t love it like its predecessors. There are still a lot of missing links between Covenant and the original Alien, and I can’t wait to see how Scott maps it all out.

And just for the hell of it, here’s my ranking of all the Alien movies (minus the AVP films):
1) Aliens
2) Prometheus
3) Alien
4) Alien: Covenant
5) Alien3
6) Alien: Resurrection